We are all slaves to our fear of looking stupid. Maslow posits in his Hierarchy of Needs that security is the most important psychological need. It shouldn’t be news to anyone, or at least anyone that was once a middle school student. Or a basketball fan. Remember how Rick Barry shot free throws, or more recently, his son Canyon? Despite both of their incredible percentages from the stripe, they were the target of much flak. Wilt Chamberlain called it “sissy shooting” and Shaquille O’Neal said he’d rather shoot zero than shoot underhanded (Shotton).

Cornell psychology professor Dr. Gilvovich says this fear derives from the “spotlight effect,” or the idea that we’re the recipient of more attention far more often than we are. The internet is doused with advice to try to overcome the effect: that we all look stupid sometimes, life is short, no risk equals no reward, and that everyone is too self-centered to notice you in the first place. Those last two are actually pretty spot on in terms of marketing.

An article by Marketingweek pointed out that we need to be careful of letting the fear of looking stupid trickle over into business, because prioritizing ego over performance only results in average marketing, unmemorable campaigns, and boring ads. The “spotlight effect” in digital marketing rings true in that only 9% of ads are viewed for more than a second.

Shooting free-throws like everyone else may help you fit into the traditional mold, but you’re sacrificing points. Safe advertisements may be conventional, but no one will watch or remember.

Fortunately, one company is learning and breaking free from the norm. Laundry business Henkel is looking to “disrupt the sector with diverse and emotionally-driven campaigns.” Not to call out any particular laundry company, but we can all picture what a stereotypical ad looks like: a mom is doing laundry because the kids spilled juice, or got grass stains on their soccer jerseys. Floating linens fly in and across the screen. Maybe a zoom in on some fabric fibers.

For their new color catchers, Henkel wanted to convey that anyone could throw anything into the wash together; no need for separate gym loads, business loads, and one for more casual street clothes. 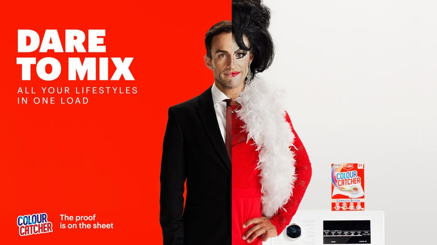 Certainly, there was an advertising manager who thought they’d look silly pitching this at some point along its timeline; it’s kind of a weird campaign. However, unstereotypical ads are a great way to stand out, especially when you’re not the biggest player in your market category. Time will tell if other companies catch on.