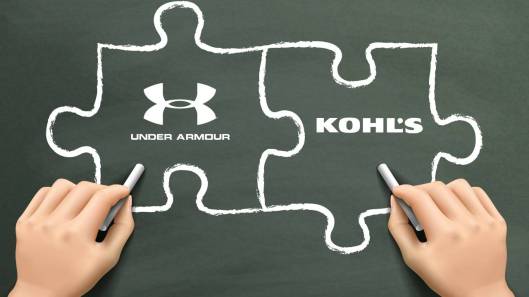 Kohl’s and Under Armour have recently partnered in hopes of increasing sales for both companies. Source: Google Images

Kohl’s has been struggling for a few years, as competition with major online retailers, such as Amazon, has intensified. In the last quarter of 2016, Kohl’s experienced a 2.8% decrease in sales, and a 15% decrease in net income, according to a recent Advertising Age article. In hopes of boosting its sales and attracting more customers, Kohl’s has recently partnered with Under Armour, and will now be selling its products in stores and online.

The recent partnership with Under Armour is the biggest product brand launch in Kohl’s history, according to Kohl’s representatives. Kohl’s CEO, Kevin Mansell, believes this partnership is a significant opportunity for growth in sales of women’s and children’s apparel, as well as footwear. The brand’s presence in physical and online stores already spans from children and adult sports apparel, to shoes, and even accessories and home products.

Kohl’s has been struggling to attract customers, and hopes this important partnership will have a positive impact. In the past year, there have been more than 500,000 searches for Under Armour on the Kohl’s website, showing an interest amongst Kohl’s potential and current customers. In fact, the wellness product category has been among the strongest throughout the company’s period of struggle, with double-digit growth in 2016. With the addition of Under Armour products to its stores, Kohl’s hopes to become more of a “destination for wellness” and is expected to bring in younger consumers in search of activewear, according to the article.

Under Armour, too, hopes to benefit from this deal, as it experienced a 12% decline in revenue in the last quarter of 2016, and its stock declined by a critical 30% last year, according to the same Advertising Age article and CNN. The company faces similar challenges to Kohl’s as it pertains to the competition of online retailers, as its products are sold primarily in brick and mortar athletic wear and sporting goods stores. For instance, one of its retailers, Sports Authority, recently went out of business. The deal with Kohl’s provides an opportunity for Under Armour to regain a portion of the middle-market customers that were lost with the closing of Sports Authority stores, according to Advertising Age.

– Kohl’s has partnered with Under Armour and is using 30-second TV spots, such as this one, to communicate the new partnership. Source: YouTube.com

To support the addition of Under Armour products in its stores, Kohl’s is launching a dedicated Under Armour marketing campaign. With the help of advertising agencies Anomaly and Huge, Kohl’s is rolling out a campaign that includes primarily 30-second TV spots and significant social media marketing. With this marketing campaign, Kohl’s hopes to appeal to a broad audience, ranging from “high performance athletes to family fitness enthusiasts,” according to Kohl’s.