In the past several years U.S. companies are increasingly turning to China to build up their brand and expand operations. Given the explosive growth of e-commerce in China, U.S. based companies see China as a huge future growth platform. The benefit of e-commerce, as mentioned by AdAge, is it allows a company to go into cities before opening a brick-and-mortar store; The consumers can learn and recognize the brand before the company is even present. Chinese consumers have an affinity for Western brands because these brands are perceived to have a higher quality than domestic products.

Although there are enormous opportunities for U.S. brands, there are also significant obstacles with moving into China. One of the main difficulties that U.S. based companies find is that e-commerce is regulated heavily by the Chinese government. In order to combat the biggest challenge, U.S. companies often partner with a company that maintains local presence in China. 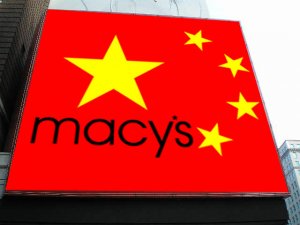 Macy’s is launching an e-commerce pilot with Alibaba in China, to help combat its decline in recent earnings. Source: Google Image.

Macy’s recently paired with a Hong Kong-based Fung Retailing Limited to help bring the U.S. department-store chain into China. Some of the first steps to be taken in the joint venture will begin with an e-commerce pilot on Alibaba’s online marketplace, which features foreign brands and merchants that can sell to Chinese consumers. Macys, through the new e-commerce partnership, hopes to make its brand more recognizable to Chinese expats and tourists visiting the U.S.

Gap has been one of several successful U.S. based first-movers into the Chinese market and has continued to build on its presence in China since 2010. When Gap made the decision to move into China, the company simultaneously opened brick-and-mortar stores and began their e-commerce marketing. Gap has built its brand awareness to be in the mid-70th percentile in first-tier cities in China. Furthermore, Gap’s revenue for China, reported in 2013, reached $300 million, just three years after launching in China, and by 2016, the company expects revenue to reach $1 billion. 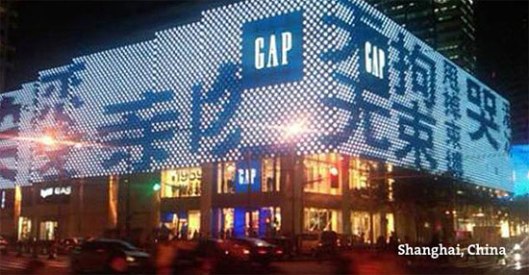 Gap has not only has a strong e-commerce presence in China but also has brick-and-mortar retail stores. Source: Google Images.

China has embraced e-commerce by overtaking the U.S. to be number one in the global market. China presently has 407.6 million digital buyers whereas the U.S. boasts a fraction of that at 171.8 million digital buyers. Although the economy in China right now has seen some volatility, these U.S. companies are continuing to look to Chinese consumers as a way to expand their reach and gain revenue.