As a means to compete with its rivals in the fast casual market, Taco Bell announced earlier this week that it will begin serving alcohol in one of its Chicago locations. Already serving alcohol are Chipotle, Shake Shack, Starbucks, Chipotle, Sonic, While Castle, and Burger King. The idea is to make these places more of an after work and evening hangout. This is especially fitting for Taco Bell. Taco Bell’s director of public affairs, Rob Poetsch, told USA Today, “I think it’s no secret that Taco Bell and late nights are synonymous.”

As noted by Brandchannel, Taco Bell is already serving alcohol in South Korea, Japan, and Spain; however, this will be its first domestic restaurant to do so. The new location has applied for a liquor license and is waiting for approval. It will be in Chicago’s hip Wicker Park neighborhood, set to open this summer with beer, wine, and, a vodka-based Starburst Strawberry Freeze cocktail, along with other frozen drinks.

Beverage options do affect, and sometimes drive, consumers’ restaurant choices. According to a 2014 survey by industry research firm Technomic Inc., approximately 21% of consumers said that beverage choice played a very important part in deciding where to eat.

The drink menu will not be the only difference about the Wicker Park Taco Bell: it will also be about half the size of other U.S. locations, have an open kitchen, utilize bar seating, have exposed brick walls, and display local art. Perhaps most shocking, there will be no drive-thru window, which typically accounts for 70% of sales according to USA Today. Poetsch acknowledges that Taco Bell is underrepresented in urban areas and hopes that this experimental store can serve as a sort of test. 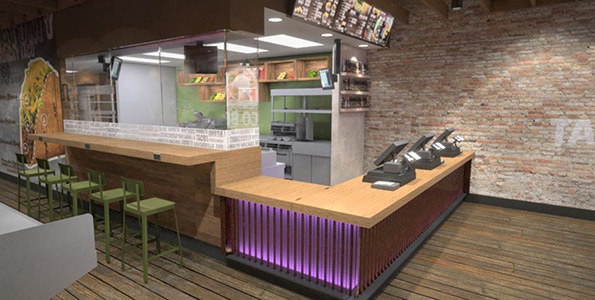 The decision to introduce alcohol came after another important announcement mentioned in AdWeek: in late May, Taco Bell executives said that the chain would be removing artificial ingredients from its products. This, too, will help appeal to Millennials.

Management does not expect alcohol to account for a large source of revenue (indeed, alcohol only accounts for 1% of Chipotle’s sales); rather, this decision was made in an attempt to stay relevant and give consumers what they want, including flexibility regarding what to drink.

Among the precautions the company is taking, alcohol will be served in separate cups to ensure it remains within the restaurant and employees are being trained on how to identify fake IDs. Taco Bell is also hiring a third party company (“secret shoppers”) to ensure that employees are checking IDs before serving customers.

Critics point out the difficulty of securing alcohol licenses for cities across the United States while others point to the increasing trend of healthy eating, claiming that adding alcohol to the menu is insufficient to regain lost customers or attract new ones. Yet, these large chains have continued to innovate (consider Taco Bell’s breakfast menu—the chain reported a 9% increase in first quarter 2015 sales!), and alcohol could be the next big thing, with even bigger players following suit in the near future.