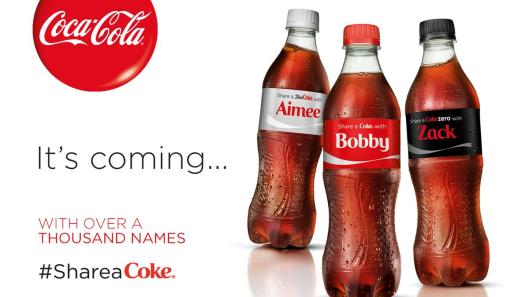 Coca-Cola will reintroduce and expand its “Share a Coke” campaign this summer. Source: Google Images

Coca-Cola is the “most effective global marketer” according to the 2015 Effie Effectiveness Index, which recognizes the companies, brands, and agencies behind the world’s most effective marketing ideas. This index is based on more than 40 national and regional Effie Award competitions yielding 3000+ finalists. It also retained the No. 1 ranking in the index’s “most effective brands category” for the third year in a row.

However, the company previously experienced consistently declining or stagnant sales volume for 13 years, from 2000 to 2013. The company’s “Share a Coke” campaign, in which individual first name are directly printed onto Coke bottle labels, turned this trend around when it was introduced to the US in the summer of 2014. This summer, the company is bringing back the popular campaign with more names and package varieties.

The initiative first debuted in Australia in 2011. Lucie Austin, director of marketing for Coca-Cola South Pacific when the program was launched, cites research that indicates, “while teens and adults loved that Coca-Cola was big and iconic, many felt we were not talking to them at eye level.” She adds that “Australians are extremely egalitarian…by putting first names on the packs, we were speaking to our fans at eye level.”

An immense amount of time and research went into the campaign’s success. The South Pacific marketing team reports that the initiative took:

To learn more about the region’s efforts, watch the video below:

The campaign was brought to the US last year, using the most popular 250 first names among teens and Millennials in addition to generic phrases such as “superstar,” “bff,” “family,” and “friends” printed on 20 oz bottles of Coke, Diet Coke, and Coke Zero. According to AdAge, “Share a Coke” was “an unquestionable hit, contributing to improved sales trends…people scooped up bottles in search of their own or a friend’s name on the label.” Beverage Digest reports that Coke grew sales volume in the US for the first time since 2000. Carbonated soft drink sales in the US grew by more than two percent last summer following the campaign’s introduction to the region.

This summer, Coke will bring back its campaign using at least three times the names and more packaging sizes and formats.

1 thought on “Coca-Cola to Reintroduce Popular “Share a Coke” Campaign, This Time with More Names and Package Varieties”