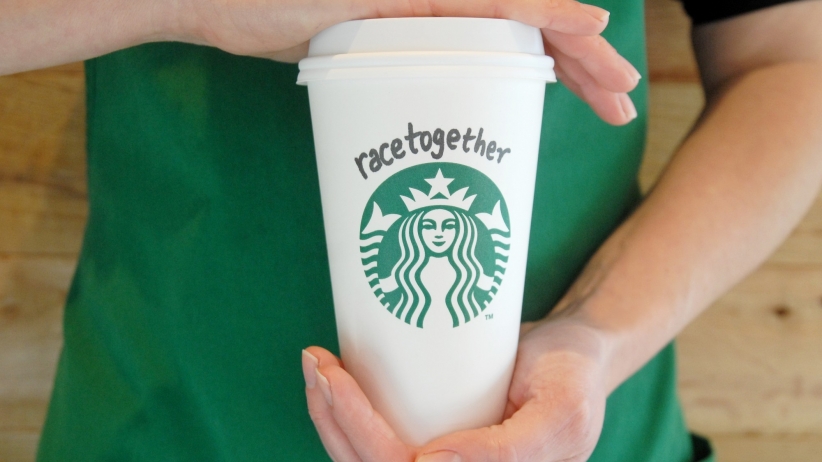 Starbucks CEO Howard Schultz has never been known to sit quietly in the corporate background. Under his direction, the company has taken liberal stances on a variety of controversial topics such as same sex marriages, Congressional gridlock, and gun control. However, many consumers are questioning whether Starbucks’ latest campaign, “Race Together,” is out of scope or even inappropriate for the company to address. Schultz denied that race is too hot of a topic for the company to tackle, acknowledging that the issue is emotional but “so vitally important to the country.”

The initiative followed months of employee consultations in cities where racial tensions run high (i.e, New York, Chicago and Seattle) after grand juries failed to indict white police officers in the killings of Michael Brown in Ferguson, MO, and Eric Garner in Staten Island, NY. It was first announced last Sunday, when Starbucks ran a full-page ad (a black page with “Shall We Overcome?” written in the middle, along with the words “Race Together” and the Starbucks logo) in the New York Times. A similar USA Today ad was published the next day. USA Today is partnering with Starbucks in this initiative and, on Friday, included the first of a series of inserts with information about race relations. The inserts are also available at Starbucks.

An article in Fortune reports that Starbucks has 4,700 U.S. stores and nearly 200,00 workers. While 40% of those are members of a racial minority, critics point out that the company’s top leadership is heavily Caucasian.

As previously mentioned, Starbucks has received considerable backlash since it introduced its campaign. Many claim that race is too serious of an issue for the company to address, and that trying to do so is irrelevant to the company and even offensive, as the topic must be vastly oversimplified in order for it to become a casual, coffee-shop conservation. Additionally, it likely puts unwanted pressure on Starbucks employees, who may have to deal with ignorant, racist, or violet customer reactions. Moreover, with 40% of baristas being members of a minority race, starting a conversation about race relations with a largely white customer base could prove to be uncomfortable.

Social media has been the primary platform through which the public has shared its skepticism of the new initiative. One tweet states, “I would go to ‪@Starbucks for a ‪#RaceTogether conversation but none of them are in my predominantly black neighborhood. Hmm I wonder why?” In fact, Starbucks Senior Vice President of Global Communications Corey duBrowa told Medium.com that he temporary deactivated his Twitter account because he “felt personally attacked in a cascade of negativity” after announcing the campaign.

Other concerns include slower in-store service, deceased sales, and lack of shareholder support. One employee points out how the campaign contradicts the company’s former policy prohibiting employees from talking about politics on the job. However, Schultz has proven all the more willing to assume these risks, inviting one opposing investor to sell his Starbucks shares if he felt he could find another stock with as high a return rate.

Even though baristas are no longer writing “Race Together” on Starbucks cups, the campaign will live on in other forms. Starbucks will put out fill-in-the-blank conversation starters, such as “In the past year, I have been to the home of someone of a different race __ times.” Additionally, the company will host forum discussions, co-produce special sections in USA Today, and put more stores in minority communities.

To learn more about the campaign, search for #RaceTogether on Twitter or take a look at the video, below: